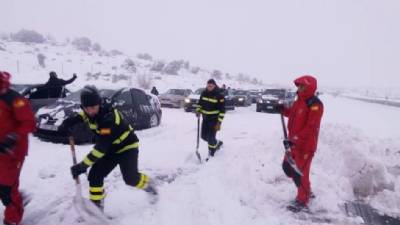 THOUSANDS of drivers were stuck on the AP-6 motorway for over 18 hours in Madrid, Segovia and Ávila in a snowdrift until the Armed Forces.

Complaints and photographs flooded social media as the occupants of at least 3,000 cars said they had been given no details of what action was being taken, and had not seen snow ploughs or gritter lorries since they became stranded at about 20.00 on Saturday evening.

Just hours after reopening the AP-6, the General Directorate of Traffic (DGT) shut it again, along with the AP-61 and AP-51, due to 'increasingly-intense snowfall', but all three motorways are now said to have opened again.

Several opposition parties in government, including the main political forces – the PSOE, Podemos and Ciudadanos – have criticised the reigning right-wing PP for its 'poor management' in light of the extreme winter weather hitting Spain and have called for the minister of public works Íñigo de la Serna, who is responsible for transport infrastructure, to explain himself in Parliament.

DGT boss Gregorio Serrano insists that his department had been 'issuing warnings since Friday morning' via overhead signs on the roads and on social media about the risks of driving when snow was forecast, but that 'some drivers either did not find out or took inappropriate decisions' leading to them becoming trapped.

De la Serna has announced an inquiry will be opened into the AP-6 toll firm Iberpistas, part of the national firm Abertis' holding Autopistas, and its handling of the situation.

Autopistas claims it put in place a Winter Highways Operational Plan (POVI) under the 'direct supervision of the ministry of public works and the DGT' on January 5.

Overall, thick snow across the centre and north of the mainland has caused traffic chaos this weekend, with roads blocked and slow-moving traffic, trains cancelled and schools – although open – advising parents not to send their children in if they are likely to face difficulties.

Some members of the public have uploaded photographs of themselves on social media knee-deep in snow to prove that they cannot get to work.